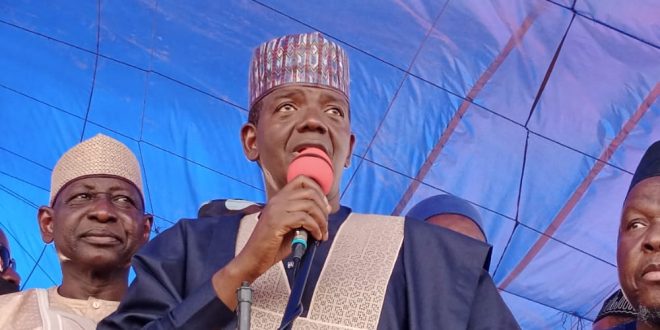 Governor Bello Mohammed Matawalle of Zamfara State has described the inauguration of the new leadership of the state chapter and subsequent presentation of certificates of return to the exco as an affirmation that the APC is one under Hon. Tukur Umar Danfulani in the state and brings to an end the actions of peddlers of lies and their blind followers.

In a statement Signed by Yusuf Idris Gusau
APC Publicity Secretary Zamfara State made available to newsmen revealed that .

The governor made this known when he welcomed the newly inaugurated chairman Hon. Tukur Umar Danfulani and some of his Executive members who paid him a thank you visit at the Zamfara State Governor’s Lodge, Maitama, Abuja.

The governor congratulated the State APC Chairman for his successful inauguration as the substantive and duly elected chairman of the party in the state.

He further said that the APC as a party in Zamfara State under the new leadership will definitely deliver and record more positive results that will lead to an unprecedented election victory come 2023 and beyond.

Matawalle also called on all party supporters at all levels to come and join hands with the Tukur Danfulani leadership to move the party forward and for those yet to revalidate their membership or register to hasten doing so before it is too late.

He added that the issue of factional leadership, even if it existed, is now over in the state because by the swearing of Tukur Danfulani as authentic Chairman of the party, it’s now obnoxious to any group in Zamfara to claim ownership of the party leadership other than Hon Tukur Umar Danfulani.

He asserted that anybody who promotes such, will be considered as someone working on behalf of opposition and fighting political stability and cohesion in the state and would be treated as opposing stability, tranquility, and unity in the state while it is poised to finding lasting solutions to insecurity and socio-economic problems.

Presenting his certificate of return to the governor, the state Chairman of the party, Hon. Tukur Umar Danfulani said he was at the governor’s residence in order to appreciate Matawalle’s constant support and cooperation to the successes being achieved.

He assured to work towards adhering to all party constitution and provide level playing ground for all party members to strengthen the party’s internal democracy.

Tukur further said that APC under his chairmanship will continue to consult widely for the purpose of bringing other people into the party.