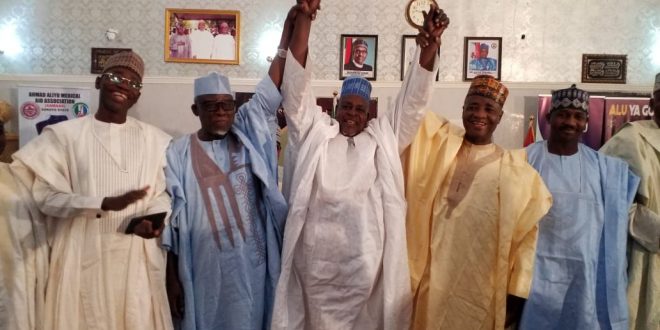 As the days for 2023 general elections in Nigeria are drawing nearer, the ruling All Progressives congress, APC in the country has continued to receive hundreds of thousands of PDP members who are dumping the party across the length and breaths of the country.
In a statement Signed by Bashar Abubakar
S.A Media to Senator Aliyu Magatakarda Wamakko, made available to news men revealed that.
The recent event today was the  defection of the PDP stalwart in the state Alhaji Sahabi Bojo Bodinga from sokoto South Senatorial District a zone where Governor Aminu Waziri Tambuwal come from.
Alhaji Sahabi Bojo Bodinga explained that he and his teeming PDP supporters across the state have left the party for APC.
Alhaji Bojo Bodinga was happily received into APC by the leader of the party in Sokoto state, Senator Aliyu Magatakarda Wamakko, Sarkin Yamman sokoto and was assisted by the Minister of Police Affairs, Alhaji Muhammadu Maigari Dingyadi, APC Gubernatorial Candidate in the state, Hon.. Ahmad Aliyu Sokoto and APC Chairman, Hon. Isah Sadiq Achida, among many other APC leaders.
Speaking on behalf of the party leadership, the Chairman of APC in the state, Hon. Isah Sadiq Achida, while welcoming Alhaji Sahabi Bojo Bodinga into the party,assured him and his supporters of equal treatment in the party.
The event that was held at the residence of APC leader in the state, Senator Aliyu Magatakarda Wamakko at Gawon Nama, Sokoto, was graciously witnessed by many prominent APC loyalists in the
Share