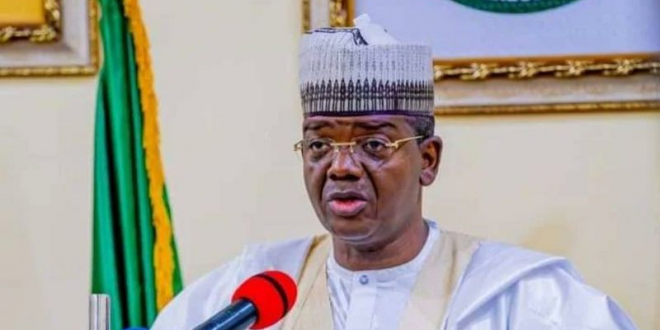 Zamfara State Executive Governor, Hon.Dr. Bello Mohammed Matawalle MON (Shattiman Sakkwato) has called for more stringent measures against all those involved in any form of human traficking and gender based violence in the country.

In a statement Signed by YUSUF IDRIS GUSAU
Director General, Media, Public Enlightenment and Communications to the Governor made available to journalist revealed that.

The governor made the call today in Abuja in a message he delivered to mark this year’s ‘World Day against Trafficking in People,’ which held at the British High Commissioner’s residence, Maitama, Abuja.

He noted that such measures should also handle all those colluding with others to commit the act saying such a person or group of persons should be made to face the full wrath of the law.

While describing this year’s topic, `Victims’ Voices Lead the Way,’ as  apt, Matawalle said it will certainly put the victims of human trafficking at the centre of the campaign and will highlight the importance of listening to and learning from survivors of human trafficking which will also provide better approach and response against the menace which is like the return of slavery in the age that recorded the highest pinnacle of development in all spheres of human existence.

He stated that, having noticed an upsurge in gender based violence related issues in Zamfara, his administration set up a high powered committee under the leadership of the first lady of the state with a view to ensuring all policies and programmes involve women and children in order to achieve an egalitarian society which will equally provide a veritable platform for development.

The Shattiman Sakkwato who was represented at the event by the Permanent Secretary Ministry for Humanitarian Affairs, Bala Umar Tsafe then commended organizers and stakeholders at the event for packaging the programme with the hope that all participants will genuinely engage one another towards coming up with a roadmap that will finally nip the act of trafficking in persons and other related issues in the bud.