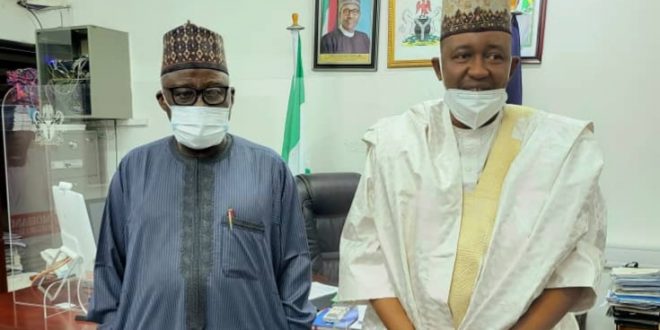 The Chairman said he was at the minister’s office as part his familiarisation visit to the major stakeholders of the party in the country to seek for his advise and support towards the success of the party in Zamfara state and the nation at large.

The Chairman said “I am visiting you today as one of our leaders in the party who is from our old Sokoto state to register our appreciation and to also familiarise ourselves with leaders of high repute in our party of which you are one.”

He noted that since the emergence of the new APC leadership in the state, he embarked on a familiarisation visits along with his team of the State Executives of the party to elders and major stakeholders including leaders of the state such as Senator Ahmad Sani Yariman Bakura and Alhaji Mahmud Aliyu Shinkafi and many others.

Tukur Danfulani assured the minister that APC in Zamfara under his leadership will remain one united family that is restructured to the test of time and expressed confidence that the APC is the only party that will be successful in future elections.

According to him, the party is enjoying hundred percent support and cooperation of the state leader of the party and Governor of the state, Honourable Bello Mohammed Matawalle and is making all efforts in uniting all party members to remain one.

Responding, the Minister of Police Affairs, Honourable Muhammad Maigari Dingyadi thanked the chairman for the honour and respect shown to him and assured him of his full support and cooperation for him and the party to succeed.

He said his doors are always open for the chairman to seek for any advice and guidance in running the party towards success.

Maigari expressed his happiness on how the new leadership of the APC in Zamfara state is changing the old narratives to a more positive structure as acknowledged by genuin members at both the state and national levels.

He further noted that the APC in Zamfara is now being handled by young energetic politicians who are more determined to the success of the party at all levels.

The Chairman was accompanied by the state Commissioner of Commerce and industry, Honourable Yazid Shehu Danfulani.

The State APC Chairman also used the trip to visit the Police DIG Operations, Mr. Ahmed Zaki at the Force Headquarters, Abuja as well as Dr. Ahmed Abubakar Audi mni, the Commandant-General of the of the Nigerian Security and Civil Defence Corps NSCDC.

The chairman who described the visits as fruitful also reiterated his desire to continue to consult widely in the interest of the party and the benefit of members.

Previous We Are Appealing To Kaduna State Government To Consider Pensioners – NLC
Next Yulitide: Group to deploy 2000 volunteers to churches, worship centres in Bauchi.