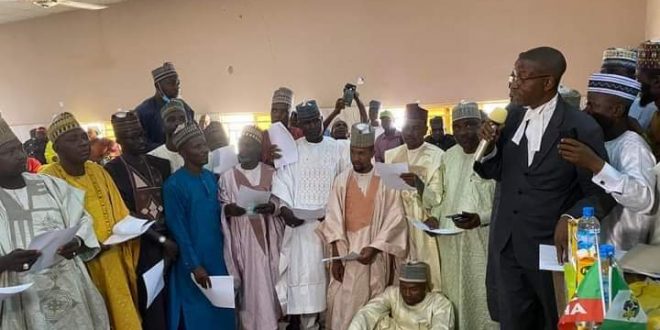 ….ZAMFARA APC EXCO INAUGURATED, CHARGED TO BE REDEDICATED TO PROMOTE PEACE AND DEVELOPMENT OF THE PARTY AND THE STATE

Chairman of Zamfara state chapter of the All Progressives Congress APC, Hon. Tukur Umar Danfulani today swore in all the 35 executive members of the party in the state with a charge on them to rededicate themselves in promoting peace and development in the state.

The chairman also during the ceremony, formally issued all the executive members their certificates of return as those duly returned elected in the rancour-free state congress that saw their emergence with the full support of the ever loyal members of the party who served as delegates at the state congress.

According to the chairman, all the executives should see themselves as equals, as helpers and supporters to one another with the sole aim of taking the party and the state to greater heights.

He noted that the governor Bello Matawalle-led administration which met the state with lots of reverses at its begining, now enjoys the full support and prayers of the good people of the state which have increased the party’s successes and its chances to overwhelmingly win future elections in the state.

He said as leaders, the executives should see themselves as servants who are willing to continue to be fair and just to all manner of persons in the state. 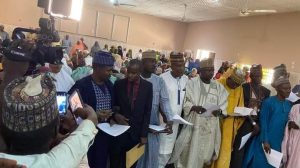 He assured to always carry all members along in his leadership with the full believe and conviction that everyone will carry his assigned responsibility to the best of his ability.

Danfulani while thanking the good people of the state for their support and cooperation to the party and government, urged them to continue to pray for the governor, the government and the party in the state so that more dividends of democracy can be provided.

In his response on behalf of the other executives, Hon.Ibrahim Umar Dangaladima, the state Secretary of the party assured the party, the government and the good people of the state that they will do their best to the appreciation of the people.

Today’s inauguration followed the March 7, inauguration of and issuance of certificates of return to the state chairman along with his colleagues from all the 36 states of the federation and Abuja by the Chairman of the Extraordinary Convention Planning Committee and Yobe state governor, Hon. Mai Mala Buni at a grand ceremony in Abuja.

During the meeting, Hon. Sanusi Garba Rikiji visited the Secretariat and declared his intention to contest for the Zamfara Central Senatorial District which recently become vacant following the appointment of Senator Hassan Muhammad Nasiha to the position of Deputy Governor.

The occasion was attended by all the 14 local government party chairmen and their executives as well as Commissioner of Special Duties, Hon. Abdulaziz Ahmad Nahuche and the state ALGON Chairman, Hon Salisu Isah Dangulbi among others.