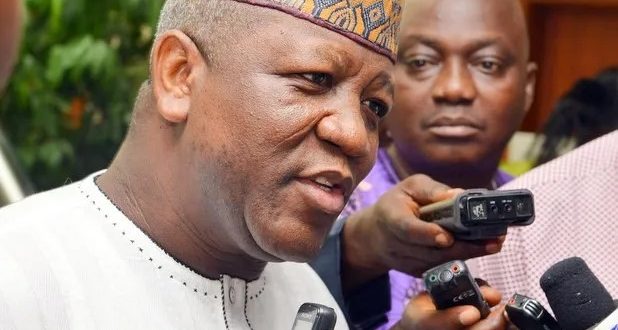 The Chairman of the All Progressives Congress APC in Zamfara, Hon. Tukur Umar Danfulani has today led all executive members of the party in the state on a solidarity visit to former governor Abdulaziz Yari Abubakar at the latter’s Talata Mafara residence.

Speaking during the visit, the Chairman, Hon. Tukur Umar Danfulani informed his host that the party leadership in the state is most honoured to be received by the former governor in such a grand way.

He said since his emergence as the party chairman, he has been working assiduously along with other members of the State Working Committee in order to bring all members together under one roof just as it was in 1999.

Danfulani recalled that as one of the founding fathers of what has now transformed into the APC, the party cannot afford to part ways with the former governor whose, generosity, good leadership and wealth of experience are political tributaries that cannot be toyed with in Zamfara.

He charged the APC stalwart to ensure that the unity that has been achieved is sustained and that more members joined the party especially now that the country is close to the next general elections.

On his part, the chairman assured that he will continue to pursue fairness and justice in his leadership where all members are treated equally.

He said the party will also ensure discipline and respect for leaders at all levels.

Responding, the former governor, Abdulaziz Yari Abubakar who was elated by the visit thanked the leaders for finding time to visit him

He described the reconciliation in the party as a way forward for the development of Zamfara and the party at all levels.

Yari thanked God for the effort and the reconciliation, urging followers to sustain the success through hardwork and total dedication for the progress of the party.

He advised the party leadership to map out strategies on how to Enlighten people about the importance of working together as enshrined in the party constitution for the success of the party in the forthcoming elections in the country declaring that the party will remain to the only winning party in Zamfara state.

He also urged those who felt aggrieved as a result of the reconciliation to consider it as an act of God who destines acts of very being, accept it in good faith and work for the development and progress of Zamfara.